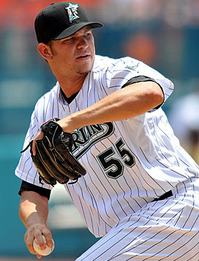 It was a cursed day game Wednesday at Busch Stadium, and so HLD&S will base this recap off of the cartoon images on MLB’s GameDay, which South Florida fans were reduced to sneaking peeks at while their boss wasn’t looking… Consider yourself forewarned.

Josh Johnson was not in top form as he took the mound, but as a true ace, all that meant was that he gave up nine hits in his six innings, most of which did not result in any runs for the Cardinals. JJ pitched out of trouble a few times and held the Cards scoreless until the sixth inning when Julio Lugo drove in St. Louis’s lone run of the game. JJ threw 100 pitches to get through six innings, and the bullpen took over from there.
The Marlins jumped on Joel Pineiro for three runs in the first inning, and played some small ball for a change rather than relying on the home run as they had in Tuesday’s contest. Of their twelve hits in the game, eleven were singles. Five of those singles were hit in the first when the Marlins loaded the bases on consecutive hits. After Dan Uggla lined out to score a run, John Baker and Cody Ross each added RBI singles to give the Marlins a 3-0 lead.
In the second, Josh Johnson helped his own cause when he singled and scored on a sac fly by Jorge Cantu, and Cody Ross added another RBI hit in the eighth to extend his hitting streak to 11 games and put the Marlins up 5-1.
The Fish pen handled the seventh and eighth innings with little trouble, but made up for that when Brian Sanches came in to pitch the ninth. Sanches recorded an out, and then the inning got a little dicey. Or a lot dicey. Mark DeRosa doubled, and with runners at second and third, it was Leo Nunez who got the call from the bullpen to come in and try to save it.
It seems Leo wasn’t thrilled that his afternoon nap had been interrupted by Sanches getting into a bit of trouble, because he promptly hit the first two batters he faced, one of whom was Albert Pujols. The two HBP forced in a run and brought the Cardinals within three. But with Matt Holliday up and the bases still loaded, Nunez induced a ground ball, and a double play that ended the inning.
Less dramatic endings to games are always preferable, but nonetheless, Leo logged his 22nd save of the season, JJ his 15th win, and the Marlins took the series from the Cardinals.
5-2, Marlins