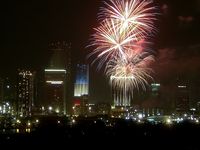 While the majority of the nation celebrates Independence Day, HLD&S is celebrating a far more important event in history: the Marlins have finally won a game against the Pirates this season.
Big Game Andrew had a nice night on the mound (other than trying out his best Chris Volstad impersonation by serving up two home runs), and earned a win for the first time in almost a month as the Fish took on the Buccos in game two of the series at Land Shark Stadium. Miller gave up a total of three runs on eight hits and struck out four in 6 2/3 innings.

While BGA did his thing, Hanley decided that after going 0-for-4 Friday night, he’d had enough of this “no RBI” business. The All Star shortstop jacked the first pitch he saw from Zach Duke, and put the Marlins up 2-0 in the first.

Meanwhile, Emilio Bonifacio worked to shift Fish fans back to the “love” side of their love/hate relationship with the third baseman. Boni went 4-for-4, tripled, and scored a pair of runs in the game. And we can’t really complain about that, now can we? (Trust us, we’ve looked at this from every angle. We can’t make it work. Sigh.)
Brian Sanches struck out three in an inning of relief, and Dan Meyer closed out the game with a 1-2-3 ninth inning for his second save of the season.
The Marlins have defeated the Pirates. And they managed to do so without so much as a one-minute rain delay.
Let the fireworks commence.
5-3, Marlins