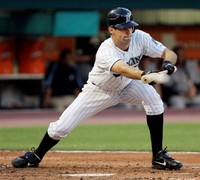 HLD&S has long championed the cause of Burke H. Badenhop for starting rotation, and at last the Marlins middle reliever will get a go at it.
Nothing says “we believe in you, Burke” like waiting until you’ve used every other possible option before giving him a chance.
With this move it has become clear that the Marlins do indeed read HLD&S before making decisions, and are finally taking our advice, giving Hopper the nod in the rubber match today against Philadelphia. OK, they’re not as much taking our advice as they’re sighing in resignation, having exhausted every other possibility but converting Matt Lindstrom or a batting helmet to starter, and are throwing up their hands in an “ok, fine, you can start” sort of manner. But we’ll take it.
While some may view Badenhop as the team’s last resort, I prefer to view Burke in more of a “saving the best for last” kind of light. (Come on, people. Before you scoff, keep in mind that being the best amongst Taylor, Koronka and Penn is not too tall an order).
Now, when HLD&S champions the cause of a player, what typically happens is that he proceeds to suck real bad, having six or more of the worst appearances of his entire life. I’m keeping my fingers crossed, though, for a nice, quality five innings from The Hopper. I figure if he can give up fewer than 8 runs in two innings, he’s already doing better than our “number one” starter, so there’s that.
A couple things to look for from Badenhop today as he faces the Philths:
1) some ground ball outs
2) a super neat nickname
3) actual hopping on the mound to complement said nickname
4) the ability to lay down a bunt
5) a complete game shut out (ok, sorry. got a little carried away there.)
You’re up, Hopper. Make us look smart, please.